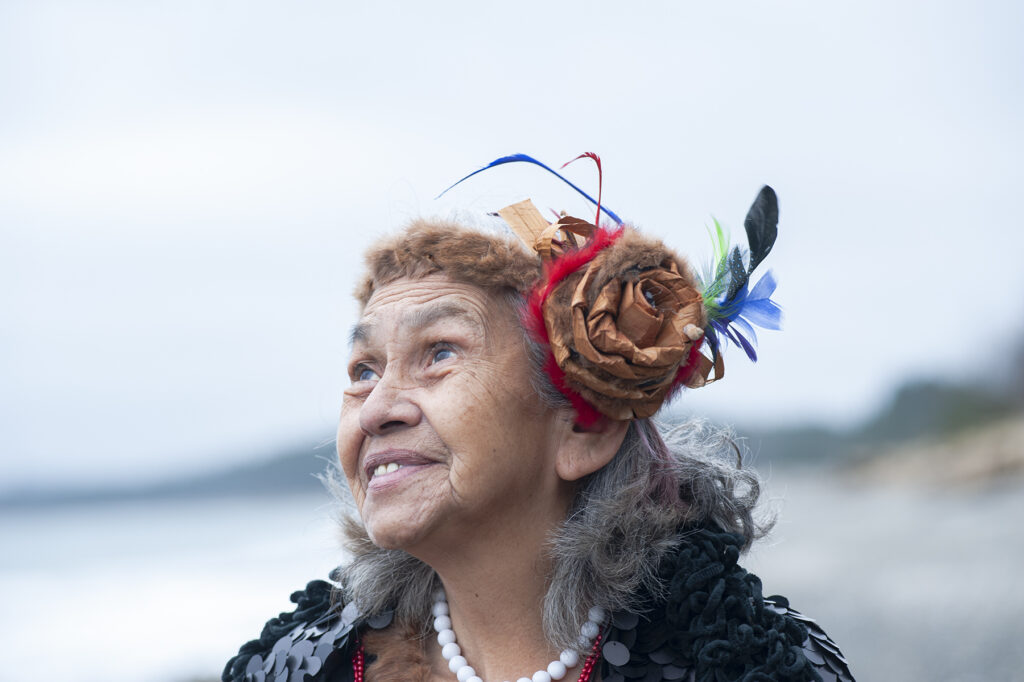 I met Sphenia Jones a few years ago and interviewed her for the World People Project by Tallulah. I called her at her home in Haida Gwaii to see how she was feeling after the news broke of the discovery of the remains of  215 children at the Kamloops Indian Residential School on the territory of the Tk’emlúps te Secwépemc First Nation. 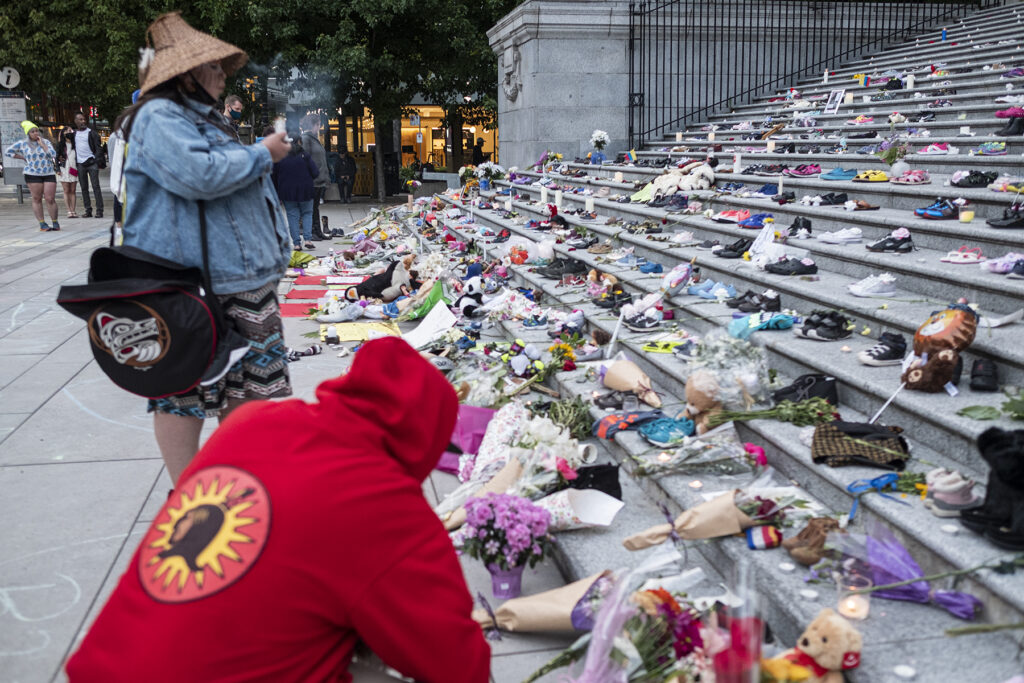 Memorial for the dead children at the Vancouver Art Gallery.

She said she has spent the last two days grieving and crying as it releases the pain. The flow of tears allows pain to dissipate and to foster a sense of forgiveness. “That is how I cope, and my cat Minnow sits with me and comforts me. I feel much lighter today”.
She says “Breaking the cycle of trauma is one of the hardest things we have to endure, but we are strong enough to break the cycle.  I just want to say that I am glad it is all out in the open now. It took so long that we were getting murdered in these schools and no one believed us.”
During the telephone call, I gently asked about her experiences at the Edmonton residential school that she was sent to. She was transported there in a boxcar meant for cattle.  The memory that haunts Sphenia, and is still so clear to this day, was the morning that she went to work in the infirmary and saw a little girl she knew was lying motionless on the iron bed. She saw blood on the pillow and tried to wake the girl, but she was dead. Sphenia then saw the back of her head was bashed in. Gently she wrapped her in a grey blanket. She remembers all the hungry babies tied to the beds, lying in their own excrement. It broke her heart.
In the middle of the night, children would be pulled from their beds by their feet. Sphenia told me that she still sleeps with her feet exposed, her reasoning being that if your feet are free of covers you can kick out.
She made friends there with Faith Lewis who she calls her partner in crime. They learned from some of the young men who had been in jail how to make home-brewed alcohol, taking potatoes peelings, covering them with bread, and leaving the mixture to ferment. “Boy did that hooch have a kick, and we managed to get some of the teenagers drunk.  We paid for that escapade and we had to clean flights of stairs and the toilets with toothbrushes as a punishment”. Sphenia mentions with a giggle that even to this day she uses a toothbrush for cleaning. 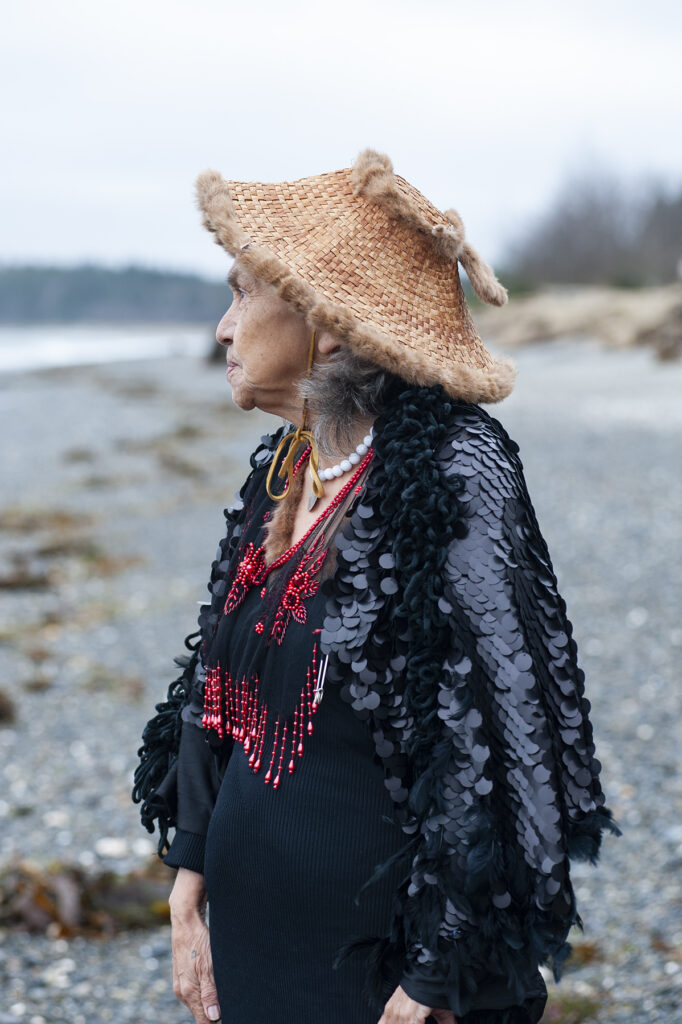 Sphenia Jones on the beach of Old Massett, Haida Gwaii

Sphenia is still actively working on her mission of supporting children on the issue of child abuse. Recently, her advocacy work has led to some funding and getting a HOTLINE for the kids in Haida Gwaii up and running is a bit closer. Other plans would be for a dedicated centre and trauma workshops. 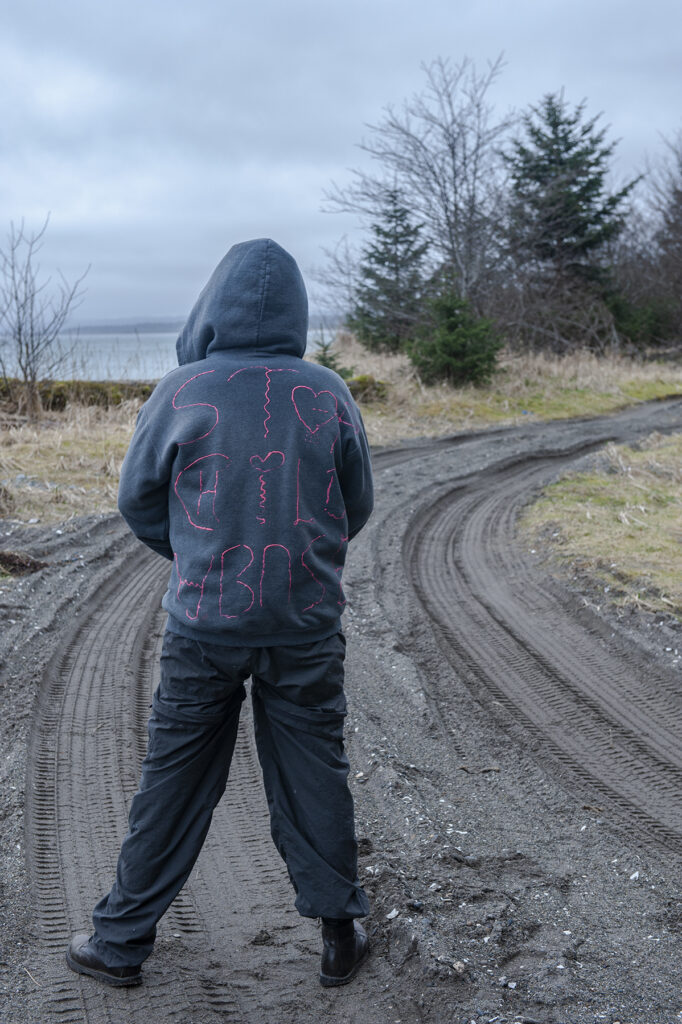 “My grandfather told me: always bring lightness and humour to situations, tell a funny story to entertain people.  Recently I was on a Zoom call discussing alcohol and drug addiction. It was a heavy meeting, so I put my fat-suit on and did a dance and the humour lightened the meeting and people left with their hearts a bit lighter.” 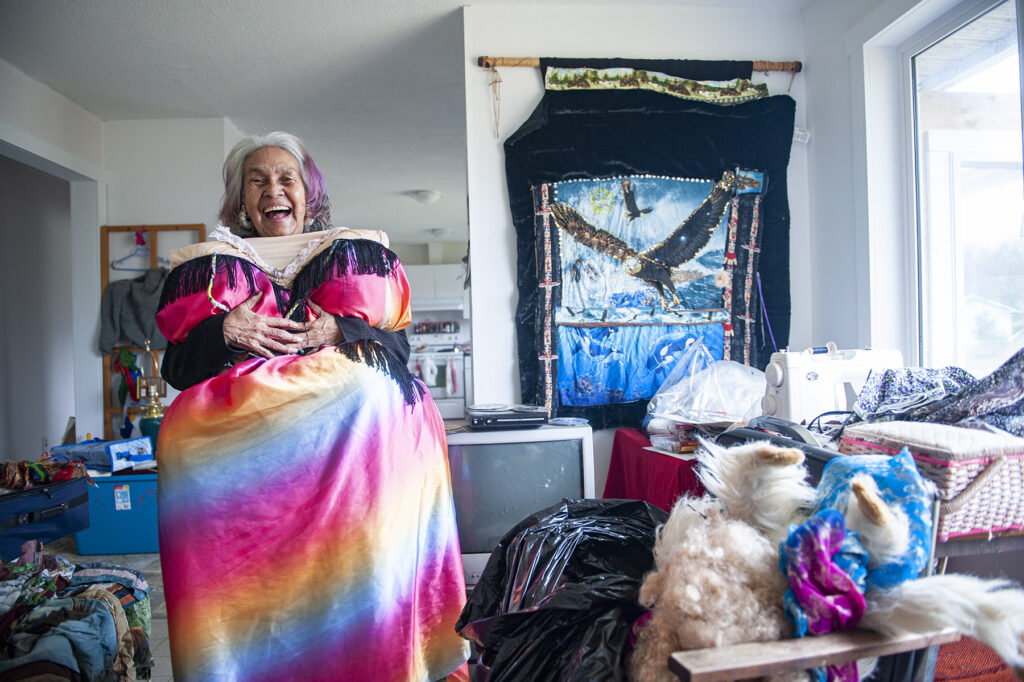 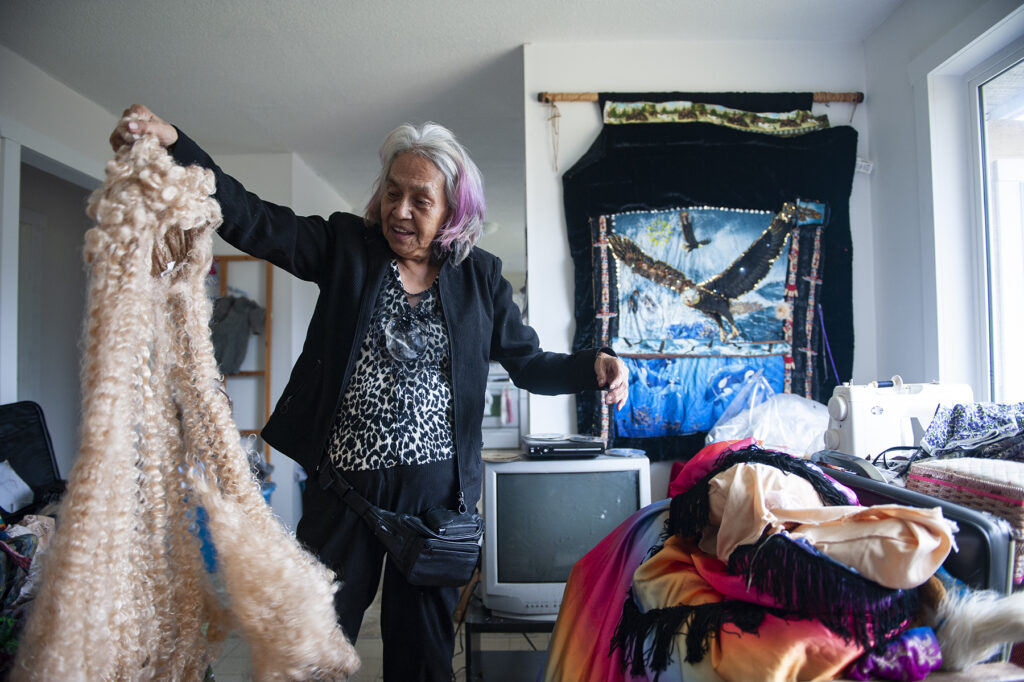 “I am very content I have a roof over my head. I have 19 beautiful grandchildren and 18 great-grandchildren. I am healthy. I feel so blessed, I feel it in my heart.”

Below is the original interview from 2016

The day I was born the wind was blowing and it was raining really hard. My grandfather gave me the name Thunder Girl; he said I was going to cause trouble and advised me to try and think before I acted. He also added that I was going to open doors. My aunt, who raised me, gave me the name Sphenia, which is an Ojibwe name, and the name of her best friend at residential school.

Provenance: Old Massett on the northern part of Haida Gwaii

Occupations: As a young child we worked hard, harvesting berries and picking from local plants to make medicines. At that time we were not allowed to speak the Haida language so we had to learn from our elders in silence. The primary school I went to had a large picture of Queen Elizabeth I on the wall, and we were forced to sing ‘God Save the Queen’, and ‘O Canada’, which made no sense to me. I always wondered who that white lady was. At the residential school, we all had jobs. I worked in the kitchen, where we prepared meals for over 1000 children. I also worked in the morgue, helping wrap up the bodies of deceased babies; this is a memory that will never leave me. In Haida Gwaii in the early ’60s, the only work for women was in the canneries where the fish was processed. This work was seasonal so I created a housekeeping business and cleaned houses all over Massett. Over the next ten or so years I became the mother of six children. It did not work out with my husband so I decided, as a single mum to move to Vancouver, where I was hoping to have more opportunities to support my kids. Vancouver was a challenge. It was difficult to find work, and I had to work very hard to make ends meet. But I am determined. I got a job with the post office, sorting mail on Commercial Drive, I did a lot of work as a home care worker and I also took on cleaning jobs. One of the cleaning jobs was at the Balmoral Hotel on Hastings Street. I saw awful things there and this led me and some other Indigenous mothers to walk the back alleys at night once a month. We were looking out for people from our communities who may have become addicted to drugs or alcohol. We wore yellow bands around our arms so we would not be arrested and thrown into jail ourselves. In those days there was a lot of discrimination against Indigenous people, especially at the schools my kids went to. As a result, I became very involved in trying to get a better education for our kids. True to my grandfather’s predictions I rubbed against the grain and irritated lots of the established politicians and educators of the day. But eventually, an alternative school for Indigenous kids was formed called Spirit Rising Cultural Survival School. Another initiative was the Empty Stocking Fund; we worked very hard to get toys donated for the kids in some of the poorer neighbourhoods. Looking back, it was tough, but I am proud of all that I achieved. I moved back to Massett, Haida Gwaii in my 60’s as my aunty gave me a house to live in. I planted trees and did home care to earn money, and finally retired when I was 67. These days I create, talk to people and travel around visiting my kids. I have 19 grandchildren and ten great-grandchildren in places as far apart as Lumni, Washington, Vancouver and Ottawa.

Passions and Interests: I have more time these days as I am retired. I enjoy keeping busy and being creative. I make fabric collages and create roses out of cedar which I turn into headbands and small sculptures, which I like to give as gifts to people I meet. I am very passionate about herbal medicines, but I also believe that we need to have a clean soul as well as body. So I am always speaking out about child abuse, and advocating to end it. Since I was a very young woman I have meditated every morning and set out every day with the mission to help at least one person; even just to give them a hug and a bit of love. A kind word goes a long way.

What do people know you for? People know me for being happy. “Why are you so happy in the morning? ” I often hear. I love performing, telling jokes and making people laugh. A few years ago, I found a ‘fat suit’ in a thrift store. I put it on and perform at potlatches and at Haida Gwaii’s Edge of the World Music Festival. I am also known for speaking my mind, my herbal medicines and being a mum to many.

Thoughts on Haida Gwaii? Haida Gwaii for me means love. The Earth shows us so much; I wouldn’t be able to survive without Mother Earth and all that comes from her. Here I can eat my own food. I grew up on all kinds of seafood: halibut, coho, spring salmon, razor clams and Dungeness crab. In the old days, we used to harvest Haida potatoes and onions, that grew along the shoreline. We were spoiled with so much fruit: huckleberries, salmonberries, blackberries and we had about ten different species of apples. The landscape has been changed a lot by logging, which still continues. I am not happy about that.

When you meet Sphenia it does not take long to fall under her sparkle. She emits compassion and her famous sense of humour. The first time I met Sphenia was at her home in Old Massett and she was showing my friend how to skin a deer. Her house is full of projects. Fabric murals adorn the wall; all made with scrap materials that Sphenia has found and mixed up to create unique and compelling compositions featuring sequined eagles, colourful totem pole motifs, and whales floating in a blue sea. For the portrait we drove to the outskirts of Massett where a path takes you through trees to the shoreline of the sea. Sphenia is from the Raven Clan, dressed up in her traditional regalia, with the unique addition of sequins and feathers more commonly suited to cabaret.